Your initial draw to Greece may be its incredible islands, but since you likely have to fly (or ship) in through Athens anyways, I highly suggest you take a day to explore all that Athens has to offer. Athens is not only the capital and largest city of Greece but also one of the worlds oldest cities. The heart of the Ancient Greek empire, this modern-day metropolis is filled with 5th century BC landmarks including the famed Acropolis that sits above the rest of the city. Athens is widely referred to as the cradle of Western civilization and the birthplace of democracy.

You can get to Athens by air, land, and water but chances are, Athens is your launch pad for getting to your next destination.

Start your day off bright and early at one of the most recognizable monuments in the world, the Acropolis. “Arco” meaning highest or upper and “polis” meaning city, this is the most important site of the city and for good reason. This citadel, as the name suggests, sits high above the rest of Athens and represents the artistic development of the Golden Age in 5th century B.C.  I highly recommend getting there before it opens at 8am and allow at least 2 hours for your visit. Even at that point, you will see that people are already lined up to get in but at least the cruise ship tourists haven’t arrived… yet. I recommend this for two reasons:

Lastly, I recommend you download the Rick Steves Audio Europe App on iTunes and download all relevant audio tours and coordinating maps to your phone ahead of time (you’ll need a WiFi connection). Rick Steves has an excellent self-paced audio tour of the Acropolis to educate you on its history. Oh, and did I mention that it’s free??

Allow 10-20 minutes to walk up the hillside to get to the Acropolis ticket booth entrance. The cost to enter the Acropolis alone is 20 euro but for only 10 euro more, you can purchase a multi-site ticket that provides you entrance to multiple other sites that I’ll get to later. If you have a student ID, bring it for discounted ticket prices. Once you enter, you will see an office on your right and that’s where water fountains are. Fill up your bottle (if it’s not full already) and head up the steps. The grand entrance of the Acropolis is the Propylaea. The Propylaea was meant to look like a mini-Parthenon and contains six Doric columns that make up it’s grandeous central hallways.

To the right of the Propylaea, you will find the Temple of Athena Nike which dates from around 425 B.C. At this temple, patron goddess of the city, Athena, was worshipped for bringing the Athenians victory, otherwise known as “Nike” (pronounced “NEEK-ee”), over the Persians. Continue to walk through the Propylaea and to left you will see Erechtheion with the temple’s six female statues that form the Porch of the Caryatids. The statues that stand there today are only faithful copies as the originals are on display in the Acropolis Museum.

Fun Fact: The Erqchtheion is supposedly the place where Athena and Poseidon fought over naming rights to the city. 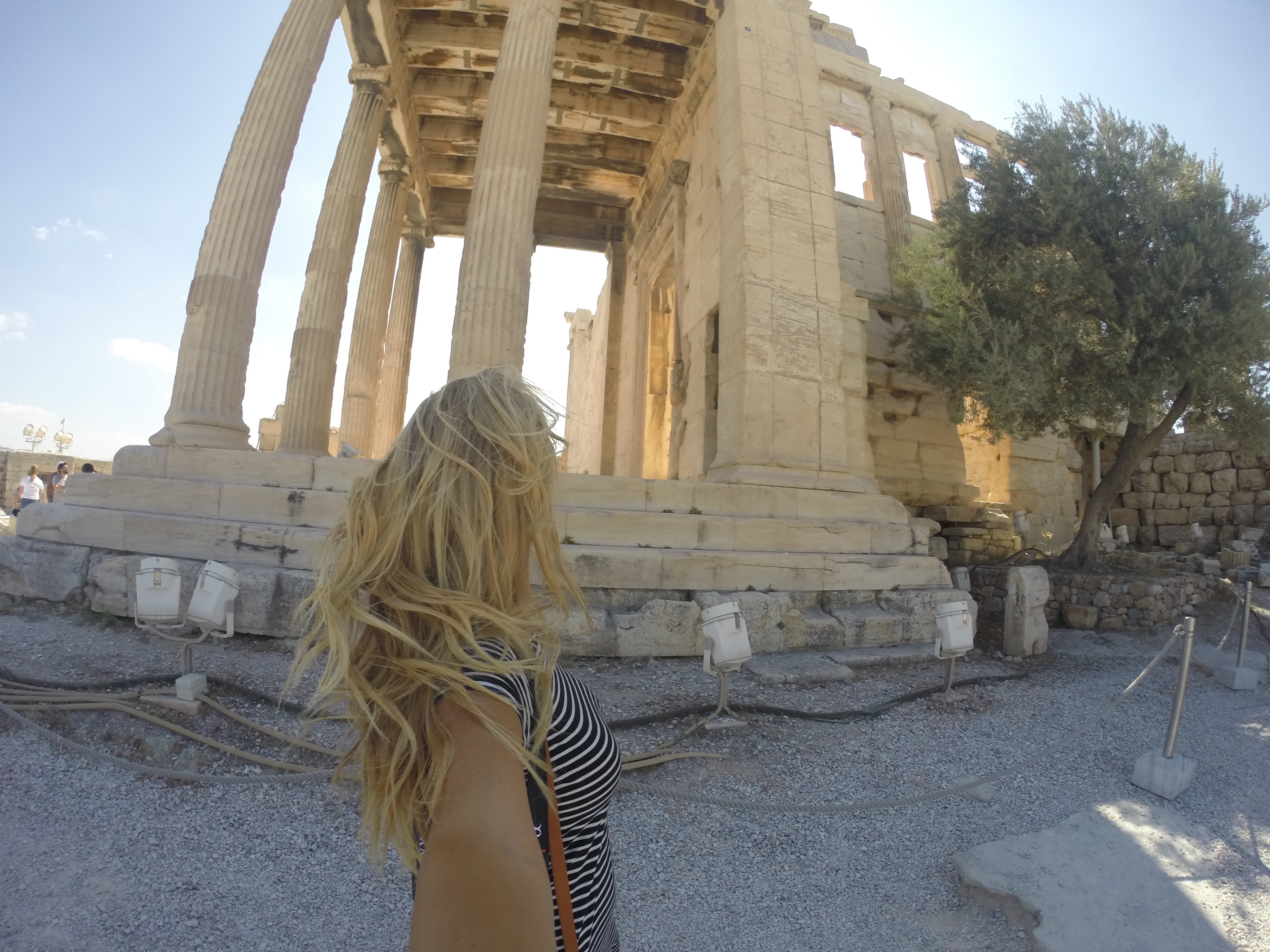 The most recognizable monument you’ll see is, of course, the Parthenon. The Parthenon was constructed with only the finest of materials and over 100,000 tons of marbles. The total cost to build the Parthenon in today’s money is estimated at over a billion dollars. Unlike many other famed structures like the Roman Colosseum, the labor was done by free men who were paid a salary and the inspiring temple was completed in less than a decade in 440 B.C. Continue to the far end of the Acropolis and you’ll see a large Greek flag. Under that flag is an observation platform with views of the city. 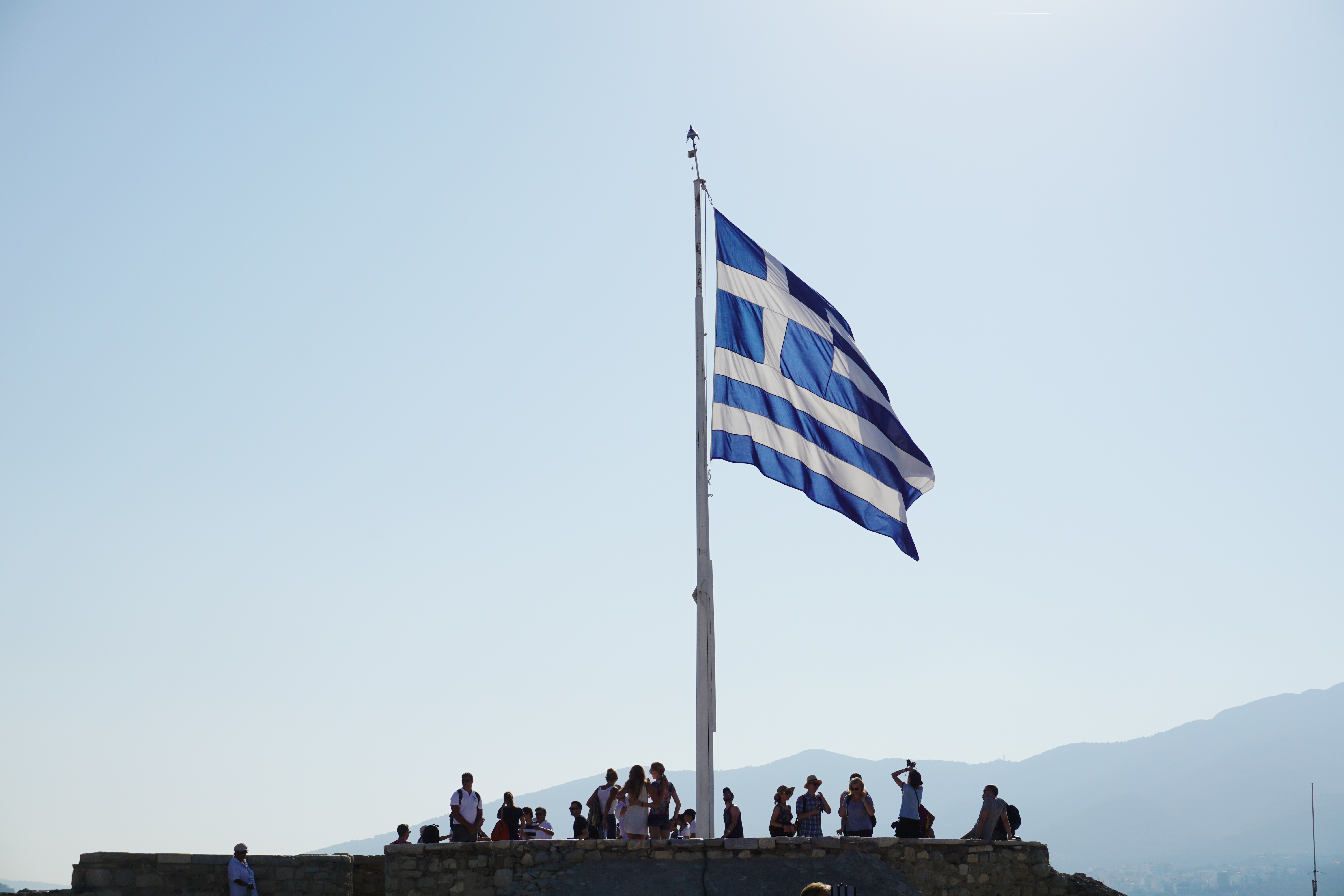 From the Acropolis, exit the main gates and head towards the rock of Aeropagos (Areopagus Hill). Be careful as you walk around as the rocks can be slippery. From here, you have a great view of the Agora, the Plaka, Monastiraki, Omonia and much of Athens. If you are spending multiple nights in Athens, be sure to catch a sunset here. At this point, you’ll likely be working up an appetite so wander down the streets towards the Roman Agora and Monastiraki Square. If the “hanger” hasn’t completely crept in, wander into the Roman Agora to see the Tower of The Winds before lunch.

From the Roman Agora you’ll hit Hadrian’s Library and just next to that is Monastiraki Square. There’s plenty of street food available so if you’re in a hurry, grab a gyro on the go and head to Ancient Agora. Otherwise, stay a while. Do a little shopping here… buy some gladiator sandals (for cheap!) and other touristy items. I grabbed a gelato at Pagotomania, which offers free wifi and nice locals who answered all my questions for what to do with my afternoon. 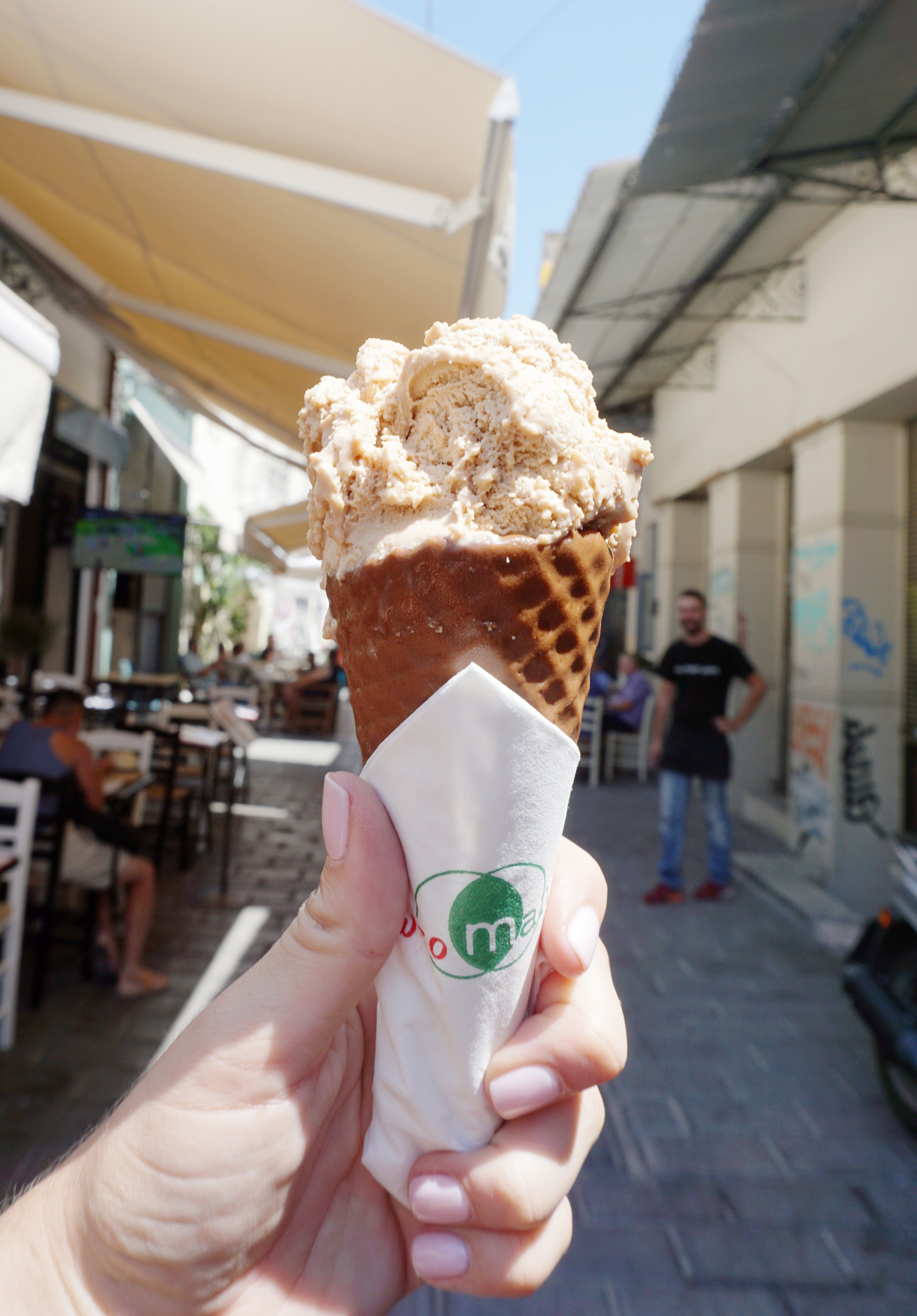 Next stop, Ancient Agora where you will see the Temple of Hephaistos and Stoa of Attalos. From here, you may want to take the Thissio or Monastiraki Metro towards Syntagma Square. Across from Syntagma Square, you will see Hellenic Parliament and if you’re lucky, you’ll get to watch the changing of the guards. On Sundays (or special occasions) the guards wear the traditional dress called “Evzones”, consisting of white kilts, red and black caps and red clogs. Hellenic Parliament resides at the top of the National Garden.

Take a stroll through the National Garden, take a moment to stop at the Zappeio.

From here you can walk to the Panathenaic Stadium, also known as Kallimarmaro (translating to beautiful marble). In fact, the Panathenaic Stadium is the only stadium in the world made entirely of marble. Originally built in 144 AD with a capacity of 50,000 seats and excavated in 1869, it hosted the first modern Olympics in 1896 and was used again as an Olympic venue in 2004.

Take Vasilissis Olgas Avenue toward the Acropolis and you will pass the Temples of Olympian Zeus and Hadrian’s Arch. The pass includes entry to this monument.

After all this walking, you’ll likely be in need of a well-deserved adult beverage. This is convenient because it’s probably just about time for happy hour. The Plaka District is the oldest neighborhood in Athens and has several options for rooftop bars to watch the sunset. End your day wandering Plaka where you can see historic buildings, do some shopping and eat an authentic Greek meal. For those looking to travel on the cheap and live like a local, Athens offers an abundance of Airbnb properties. I booked a room staying with a local and found it to be a great way to experience authentic Athens. My host gave me a list of his favorite bars and restaurants, helped me coordinate all travel arrangements and even had prepared coffee and pastries upon arrival — all for only $35 per night.